ELSA-d space debris removal mission restarts with half the thrusters


Having previously demonstrated a controlled “Test Capture”, the mission had moved on to an “Autonomous Capture” demonstration. Among the “anomalies” experienced, one issue couldn’t be resolved: four of the servicer’s eight thrusters stopped working, which affected the ability to perform the planned capture.

Making a statement on the progress of its workarounds, the company writes:

“With safety always paramount, our team has used a complex mix of burns with the remaining thrusters, aerodynamic drag, and the natural perturbations of Earth’s gravity to bring the servicer safely back to a distance where we can continue with operations.”

“With this in mind, we are planning for a controlled close approach in the near future. We plan to maneuver the servicer to a distance of 160m from the client and validate the ability of the servicer’s low power radio sensor to detect and track the client, effectively enabling a transition from absolute to relative navigation.” 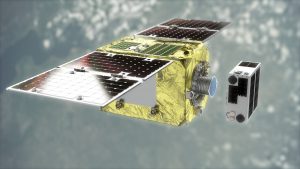 Looking on the bright side, the company highlighted that success in this demonstration would be an important advancement for rendezvous and proximity operations.

“We then plan to maneuver the servicer away from the client to a safe distance while we analyze the potential for a safe and viable recapture plan.”

Some of the phases of the full mission are pictured below.

Astroscale is a Tokyo-based startup, but its In-orbit Servicing Control Centre is at the Satellite Applications Catapult in Harwell, in the UK.

We covered Astroscale’s ELSA-d mission back in August 2021, when the company announced the completion of Phase 3A.

It successfully tested its ability to capture its client spacecraft using the servicer’s magnetic system, validating ELSA-d’s ability to dock with a client, such as a defunct satellite.

The next phase of testing was to address “Capture without Tumbling”, where the client was separated to a greater distance, and the method of rendezvous and docking would rely on a combination of on-board autonomous software and ground processing of telemetry and commands.

Screen mirroring in Windows 10: How to turn your PC into a wireless display

Mouse DPI: What it is and why you need to know