In terms of where they work, the UKSA says 1,293 space organisations are located across the UK. Scotland accounts for around one fifth of the entire UK space workforce. Employment in the sector grew from 7,703 to 8,440 in Scotland, from 415 to 1,109 in Wales, and from 113 to 431 in Northern Ireland.

London leads the way, however, in terms of the Number of Organisations Headquartered in Region, both in in terms of income value and people employed.

Sector income also increased slightly from £16.4 billion to £16.5 billion, with exports counting for around a third (32%) of this total. Space manufacturing, including satellites, spacecraft, launch vehicles and scientific instruments, grew the most in real terms; up by £23 million to £2.27 billion. 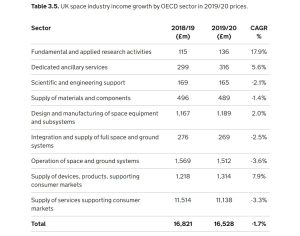 “As we support new SpaceTech clusters from Spaceports in Cornwall and Scotland to satellite manufacturing and robotics from Glasgow to Warwick to Stevenage, this will help level-up the UK. Looking ahead to the first satellite launches from the UK this year,” said the UK’s Science Minister, George Freeman. “This is an exciting time for this high growth sector up and down the country.”

In terms of investment into the UK-headquartered space start-ups over the past decade (2012 to 2021), 145 unique investors invested nearly £6 billion in 38 companies across 90 investment deals. According to the UKSA, this places the UK as the second largest attractor of private investment in emerging space companies in the world.

Private investment – including venture capital, private equity, and seed investments – represents 82% of deals and 66% of total magnitude invested over the past decade.

Nonprivate investment (including public offering, acquisition, debt financing, and select prizes and grants from government organisations) represents 18% of deals and 34% of total magnitude invested. Venture capital was the most common type of investment (41 deals), followed by the seed/prize/ grant category (33 deals). 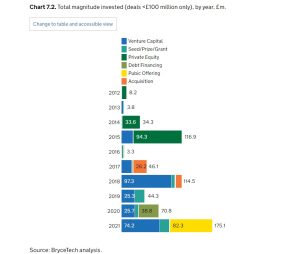 Commissioned by the UKSA, it was prepared by BryceTech, an analytic consulting firm and is based on survey data previously gathered from organisations within the UK space industry.

In terms of a three-year outlook, the report summarises as follows:

You can read the full report, ‘Size and Health of the UK Space Industry 2021’, online (PDF).